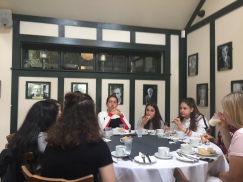 Its been a hectic and fun few days here a CAE. On Friday we went to and had cream tea in the sun. Some students had their first English scone with jam and cream. Safe to say that some students loved their scones more than others and wanted more to eat! We then relaxed in the glorious sunshine at Grantchester Meadow and played some games before we returned to Girton for Nacho Night.

On Saturday an early coach collected the students for the trip to London. Fortunately we were able to see a march by soldiers from Belgium and from the British Grenadier Guards taking part in the annual Belgian Parade in Whitehall. Its safe to say the looked very impressive in their bright uniforms and tall hats!

We saw the sights of London including the houses of Parliament, Westminster Abbey and Buckingham palace and as always London was busy thanks to events going on such as Wimbledon and the Cricket World Cup. After lunch we took a cruise down the River Thames going past famous places such as St Pauls Cathedral, Shakesperes Globe Theatre, Tower Bridge and the nearly 1000 year old Tower of London!

When we arrived in Greenwich we spent some time in the famous market and tried the amazing street food and saw the famous sailing ship, the Cutty Sark.

We eventually got back to Girton and we were all very tired. Now we are into the 2nd week of this course and the students are off into Cambridge this afternoon to learn a bit more about the city and its amazing history.